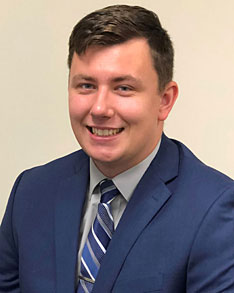 It’s your time to shine

Who is your favorite author?  What is the best book you’ve read?
I’m not an avid reader, unfortunately, so I don’t really have a favorite author. My favorite book that I’ve read outside of school would probably be “Drive: The Story of My Life” by Bob Ryan and Larry Bird, which is about Larry Bird. In my role as an Honors Graduate Assistant, I read “Just Mercy” by Bryan Stevenson, which is a pretty quick read, but super powerful.

What is your favorite movie and/or TV show?
There are so many good TV shows that I’ve watched. I have watched “How I Met Your Mother” the most, but “The Office”, “Parks and Rec”, “Brooklyn 99”, “The Boys”, “The Good Place”, “New Girl”, and “The Good Doctor” are some of the other shows that I’ve really enjoyed. For my favorite movie, I love the “Deadpool” movies.

What did you want to be when you were growing up?
I originally wanted to be a firefighter, policeman, and ambulance worker; I would say like most kids. Then for a brief period of time, I wanted to play in the NBA. When I entered college, I thought that I wanted to go into sports management, but quickly realized that wasn’t for me.

What hobbies do you have?
My girlfriend and I recently adopted a rescue (Dudley), and we walk him and play ball with him all the time. You can also find my girlfriend and me out wine tasting around New England. New Hampshire has a wine passport and the best wine in my opinion. When I’m relaxing at home, my preference is to either be watching one of the many shows listed above or to be playing “Call of Duty” with my friends.

What was your first job?
Aside from mowing lawns on my street, my first job was cleaning my cousin’s school bus garage, but that was rather short-lived. I worked at Market Basket for most of high school and part of the way into college, so that is more of what I consider my first job.

When you were growing up, what celebrity did you have a crush on?
I can’t think of any celebrities specifically, but probably someone from a Disney Channel show. I think I remember having a small crush on Ashley Tisdale and Zendaya, but I didn’t watch as much TV as I do now, so it’s tough.

What food could you NOT live without?
This is a tough one! I love all of the things that can be done with potatoes. There is also pasta, which is so versatile. I also make this really good “hot sausage dip” that is addictive. Ultimately, I think that I can’t live without my mom’s Mac & Cheese.

If you could meet one person dead or alive, who would that be?
My basketball idols were Paul Pierce and Larry Bird, so they are definitely up there on the list. I think that at the end of the day I miss my grandparents on my mom’s side and feel like I didn’t get enough time with them.

What’s your favorite sport to watch?
I think that the NFL is the most interesting sport to watch, and I can watch it end to end, but I will watch pretty much any sport. Of course, rooting for the Boston sports teams!!

What’s under your bed?
Other than dog hair? Our Roomba if it gets stuck. We really only have a container that stores shoes under the bed.

If you could choose a superpower, what would it be?
Teleportation would be so cool and useful in my day to day, but I think that super speed is the best power, and you can’t convince me otherwise. If you run fast enough you can fly, phase through things, be two places at once, time travel, effectively teleport, and always be on time to places without a worry about traffic. That’s the dream!

Alone and on an island, what would you take with you?
A boat!! An Airplane, maybe!! A Wilson Volleyball (Castaway, anyone)? I would probably bring something to hunt with or something to purify water, depending on which was more of a problem on the island.